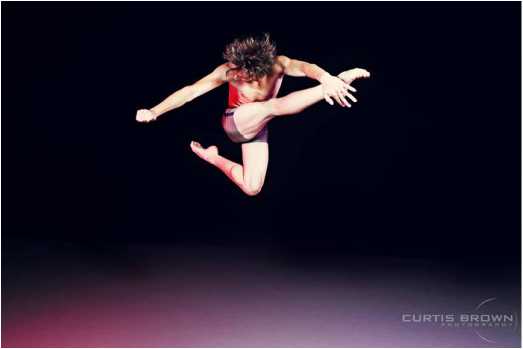 Cast in the role of the Prince in Foothills Conservatory of the Performing Art’s production of The Nutcracker for the first time in 2004, Ben made his performance debut.  Ben continued to study dance at FDC until 2005 when his family moved to North Carolina.  Ben, then began studying dance at North Carolina Dance Theatre (NCDT) in Charlotte, NC where he took classes with Jean-Pierre Bonnefoux, Kathryn Moriarty, and Mark Diamond.  As a member of the Junior Ensemble at NCDT, Ben was the featured male dancer in a piece called Tribal Whispers, choreographed by Madeline Guerdat which was adjudicated to be in the final performance during SERBA.

Ben was accepted into the ballet program at the North Carolina School of the Arts (NCSA) when he was in 9th grade and trained under Ethan Stiefel, Nigel Burley, Frank Smith, and Warren Conover.  Ben stayed at NCSA through the end of 10th grade, studying at both Boston Ballet and Houston Ballet during the summers.  At NCSA, Ben danced the roles of Trombone in Jerome Robin’s Fanfare, in the corps de ballet for Les Patineurs, Russian in The Nutcracker, Hunter in Peter and the Wolf, and in the world premier of  Johan Kobborg’s Salute.

Ben has been offered full scholarships at many summer and year-round programs including The Rock School, Boston Ballet, Houston Ballet, Joffrey Ballet, and Pacific Northwest Ballet. Ben has studied as a full scholarship student as a part of NCDTs  conservatory program. Ben also performed in several of NCDTs productions including The Little Mermaid and The Nutcracker while he was a student.  As a full scholarship/stipend student in the year-round program at the Houston Ballet’s Ben Stevenson Academy under Artistic Director Stanton Welsh, he was able to work with Claudio Munoz, Andrew Murphy, and Stanton Welch. While there he also performed in various repertory pieces set by Claudio Munoz.

Ben then returned to Charlotte to join North Carolina Dance Theatres 2012 summer intensive, after he was invited to join the second company for their 2012-2013 season. He learned and performed in various repertory during the season, including Dwight Rhoden's The Groove, Alonzo King's Chants, Mark Diamond's Bolero, and Jean-Pierre Bonnefoux's The Nutcracker, Blue Danube, and Peter Pan.

This past summer, Ben attended the American Dance Festival in Durham, NC. There he studied with Michelle Gibson, Rika Okamoto, and Alex Brady. He is a member of the original cast of Twyla Tharp's Treefrog in Stonehenge and performed in the world premiere at the Durham Performing Arts Center as a part of ADF's 2013 Season.

This season with NCDT, he has performed in Sasha Janes' Carmen, George Balanchine's Western Symphony set by Patricia McBride, Jean-Pierre Bonnefoux's Nutcracker in the role of Arabian, and other works by Mark Diamond, Alonzo King, and Dwight Rhoden. Currently he is in rehearsals with NCDT for their upcoming performances of Cinderella and continues to perform lecture demonstrations and other educational performances with NCDT II.